recent project undergoing a set of piano hammer heads replacement.
the piano belongs to a local who will no longer stay in the country and asking if i would like to
take in.
i went to inspect prior to move away the piano and discovered that all the hammer head felts were no longer glued to the molding, half of the felts went missing and soon i suspect the piano may had been invaded by mice.
some old yamaha console piano do not have their hammer felt that nailed or staple to the molding, where they only glued on it.  so when time goes by, fluctuate  changes of humidity may separate them. which becomes like the picture below. 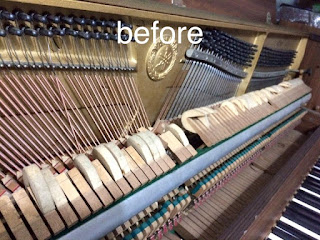 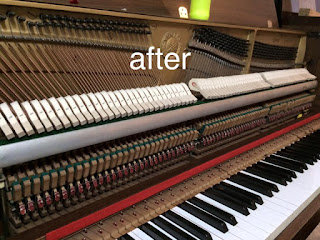 a set of japanese universal hammer heads has been installed, broken string fixed and replaced.
meanwhile an anti-friction treatment involved